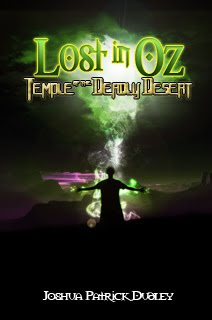 Four years after the release of his first novel, author Joshua Patrick Dudley celebrates the release of the final installment in his Lost in Oz trilogy, Temple of the Deadly Desert.

The Lost in Oz trilogy follows modern-day teenagers who make their own history in Oz after destroying the original story of The Wonderful Wizard of Oz, simply by existing in it. The teens have made it safely home to New Hampshire, that is, except Joshua, who is lying in a coma, and another member of the team who has perished in the same tornado outbreak that once brought them to Oz. The group must again travel together to the Land of Oz and once and for all find a way to derail or fulfill their prophecy. They must unlock the secrets of the Temple of the Deadly Desert and find a way to cross the lethal sands surrounding it. Will the teens fulfill their prophecy? Does the Temple of the Deadly Desert exist? Can they bring a fallen friend back to life? All these questions and more will be answered in the third and final installment of the Lost in Oz trilogy: Temple of the Deadly Desert. Famous and beloved Oz characters are also in abundance and include Dorothy Gale, Toto, Scarecrow, Tin Woodsman, Lion, Glinda, Princess Ozma, The Wizard of Oz, Jack Pumpkinhead, Scraps – The Patchwork Girl of Oz, and, of course, the Wicked Witch of the West.

After directing two amateur films, Dudley says that he was excited to return to writing. “I really put a lot of focus into developing the characters and trying to make them into relatable people that my audience can enjoy reading about. My first two novels were more about the story of these kids and not about the kids themselves. The third book presents a lot of new ideas in exciting ways and is very self-analytical. The characters deconstruct themselves and the story they created as they continue on their journey, discovering why it is important to preserve the stories of Oz the way they were meant to be.”

Temple of the Deadly Desert will hit bookstores and online retailers next month and can currently be purchased on the books’ official website www.LostinOzBook.com and on www.lulu.com.

Dudley lives and writes in Manchester, New Hampshire, which is where he grew up. He has loved Oz since he was a child and has spent the last four years traveling the country promoting his work and his passion for Oz. He also appears in middle school classrooms to discuss his novels, the writing and publishing process, and teaches creative writing workshops with children in grades 3-7.