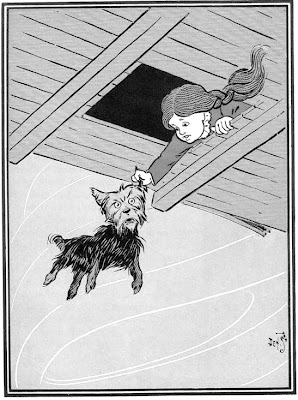 Happy (one day early) Birthday to Miss Dorothy Gale, our favorite princess of Oz! Here's one of my favorite pictures of her, with Toto, being brought to Oz!

In the Oz books, Dorothy is an orphan raised by her aunt and uncle in the bleak landscape of a Kansas farm. It is never clarified in the books whether Aunt Em or Uncle Henry is Dorothy's blood relative. (It is also possible that "Aunt" and "Uncle" are affectionate terms of a foster family and that Dorothy is not related to either of them.) She has a little black dog named Toto. Dorothy and Toto are swept away by a cyclone to the Land of Oz and, much like Alice of Alice's Adventures in Wonderland, they enter a lively alternative world filled with talking creatures. In many of the Oz books, Dorothy is the main hero of the stories. She is often seen with her best friend and the ruler of Oz, Princess Ozma. Dorothy's surname, Gale, is first mentioned in Ozma of Oz. It appeared previously in the 1902 play, where it was merely the setup for a joke, the punchline being "that accounts for your breezy manner." Her blue and white gingham dress is well-appreciated by the Munchkins because blue is their favorite color and white is worn only by good witches and sorceresses, which indicates to them that Dorothy is a good witch.

Dorothy is a forthright and take-charge character, exhibiting no fear when she slaps the Cowardly Lion, and organizing the Winkies' rescue mission of her friends who have been dismembered by the Winged Monkeys, and more than willing to brazenly talk back to Princess Langwidere's threat to take her head for her collection--"Well, I b'lieve you won't." (Baum began to indicate that Dorothy speaks in a strong prairie accent with Ozma of Oz, and continued to do so throughout the series). This aspect of her character was somewhat lessened with the companionship of Ozma, in whom Baum placed the greater level of wisdom and dignity. Yet even this is complicated by her associations with her cousin, Zeb of Hugson's Ranch, a rugged, manly boy who does not take well to Oz and cannot think of anything much more interesting than defeating the Munchkins wrestling champion, which he proves unable to do.

In The Emerald City of Oz, Uncle Henry describes Dorothy as, "a dreamer, as her dead mother had been." In The Wonderful Wizard of Oz, Dorothy's desire to return home is primarily motivated by compassion and economics. As she tells Glinda, "My greatest wish now is to get back to Kansas, for Aunt Em will surely think something dreadful has happened to me, and that will make her put on mourning; and unless the crops are better this year than they were last, I am sure Uncle Henry cannot afford it."[4] In Ozma of Oz, Dorothy's desire to return home is not as desperate as in the first book, and again it is her uncle's need for her rather than hers for him that makes her return.[5] Oz is no longer quite the dangerous land that it was in The Wonderful Wizard of Oz.[6] Princess Ozma and Dorothy quickly become best friends, and before Dorothy leaves, Ozma crowns her a princess.

Dorothy has several other pets, including her yellow hen, Billina, and her white/pink/purple kitten, Eureka. Popular in crossword puzzles is Dorothy's cow, Imogene, from the 1902 stage version, and implicitly, though unnamed, in the 1910 film. Eric Shanower's novel, The Giant Garden of Oz features a cow named Imogene, but she is of Ozite origin, but otherwise Imogene appears strictly in adaptations.

In the sixth Oz book by Baum, The Emerald City of Oz (1910), when Uncle Henry and Aunt Em are unable to pay the mortgage on the new farmhouse built at the end of The Wonderful Wizard of Oz, Dorothy brings them to live in Oz; the bulk of their appearance in the book dealing with her and her aunt and uncle is their tour of Oz, showing them the marvelous, Utopian land in which they have escaped the troubles of Kansas.

Dorothy is a standard character, having at least a cameo role in thirteen of the fourteen Oz books written by L. Frank Baum and is at least a frequent figure in the nineteen that followed by author Ruth Plumly Thompson, getting at least a cameo in all her books except Captain Salt in Oz.

The magic of Oz keeps Dorothy young. In The Lost King of Oz (1925), a Wish Way carries Dorothy to a film set in Hollywood, California. She begins to age very rapidly to her late 20s, making up for at least some of the years that have already passed. The Wish Way carries her back to Oz and restores her to her younger self, but she learns then that it would be unwise for her ever to return to the outside world. Baum never states Dorothy's age, but he does state in The Lost Princess of Oz that she is a year younger than Betsy Bobbin and a year older than Trot, whose age was specified as 10 in Ruth Plumly Thompson's The Giant Horse of Oz, a book full of controversial changes. This would make Dorothy eleven years old when she stopped aging. Her actual age would, of course, be much older.

Through the Lost in Oz novels Princess Dorothy of Oz lives on today.